The views expressed in this article are those of the author and do not necessarily represent the views of, and should not be attributed to, My Cardiff North.

Will our grandchildren inherit our IKEA furniture?

While it is of moderately good quality, it is unlikely to last that long due to wear and tear or, more likely, being discarded in favour of something newer.

We are constantly bombarded by advertisements that show happy smiling people dancing around their latest acquisition, often in living rooms the size of the ground floor of most people’s houses. The adverts are designed to make us feel inadequate and intimate that our lives will be so much better if we buy the latest sofa, flat screen, or car. It is, of course, a fantasy. But is clearly works, otherwise companies wouldn’t do it.

The pleasure we derive from our latest purchase is transitory, however. The novelty wears off and we find ourselves hankering after something else, because what we have purchased will soon be deemed outdated. But fear not; there is always something else that we can be persuaded to buy.

And so we carry on, working longer hours than we would like, to earn money to buy stuff that doesn’t last, that we don’t really want and certainly don’t need, in the hope that it will satisfy us (it won’t). This is consumerism.

Wouldn’t it be nice if we didn’t have to do this?

Wouldn’t it be nice if we could spend more time with our friends and families, enjoying ourselves and just being human. We could have more time to cultivate our creativity. We could be a lot happier. 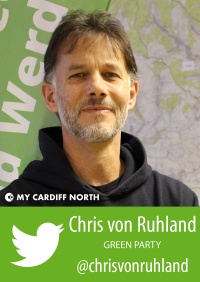 What if we designed things to last and be easily repairable? We wouldn’t need to keep replacing them. If we lived healthier lifestyles, we wouldn’t need such a huge and expensive health service. If we were encouraged to use local businesses rather than chain stores and multinationals, money would be more likely to stay in the area rather than being squirreled away in tax havens. If we built houses to be energy positive, like Cardiff University’s Solcer house, we wouldn’t need to spend so much on bills, and people wouldn’t have to choose between eating and heating. If we had a decent public transport system, our roads would be less congested and it would be much safer to cycle, so we wouldn’t need cars so much; many of us might even be able to do without them altogether.

And we’d reduce our consumption of the earth’s finite resources.

Because our current lifestyle is wrecking the planet. If everybody on earth lived as we do in Wales, we’d need 2.5 planets. Which we don’t have. So we can’t carry on as we are. Or we can, and leave the consequences for our children and our grandchildren to sort out. And the very poorest people will suffer the consequences of our inaction the most. Not to mention the countless species that will go extinct. The future is very much in our hands.

It’s unreasonable to expect everybody to suddenly change to a more sustainable lifestyle by themselves, even though some do. What is needed is leadership, and there is precious little of this at the moment.

All too often, politicians have to balance the demands of the electorate with limited budgets, all within one term of office. Perhaps it is not surprising that they have little time to give thought to long terms plans. Or perhaps it is. After all, their long term political survival, their desire to see their particular political philosophies realised depend upon them.

But that is what we need; a vision of Wales that goes far beyond the four years to the next election. A vision of Wales in 50 years’ time and beyond. For these are the timescales that we need to think in terms of. Which is why we need Greens in the Senedd. A central theme of green philosophy is to live in such a way that does not compromise future generations; to leave the planet in at least as good a state, if not better than we received it. We do not inherit the earth from our ancestors, we borrow it from our descendants.

So when you come to vote in the elections on the 5th of May, I’d like you to ask yourselves the following question: what sort of world do you want your children and grandchildren to inherit?