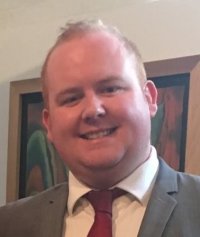 I’m Shane Andrews and I was born and bred in Cardiff, a fact I am proud of. I live my life by the mantra of ‘Work hard, play harder’.

I work hard by day in the public transport industry and then most evenings I work in various voluntary roles. These range from fundraising for various charities, being a school governor, being a trustee for Cardiff East Scout District and working with Pride Cymru.

Outside of volunteering my interests are centred around current affairs, travelling and music. I’ll listen to almost anything, from Abba through to The Zutons. I’m also a big Royalist and very lucky to say that I was invited by Her Majesty The Queen to attend a Garden Party last year. It was the best day of my life! A real dream come true.

Words used by others to describe me often include: friendly, consistent, gregarious and fun.

The main issues that I’m hearing about, be it on the doorstep, telephone or via social media, is parking.

Parking is a big issue right across the ward, be it for those in the west, impacted by business such as the Barclaycard call centre, or those in the east impacted by the many businesses at Cardiff Gate Business Park. The way to fix it isn’t an obvious one, nor an easy one, despite it seeming so simple. However, that doesn’t mean it’s not possible.

If I’m elected, I will work with residents and businesses to seek solutions. Each area of the ward is different and should be treated as so, but there are many options to be discussed such as residents permits, enforcement or maybe even a modal shift. I mention modal shift because I personally use the Cardiff East Park & Ride (P&R) each day. Nothing pains me more than seeing the car park with so many available spaces and the bus going up to Cardiff Gate with no passengers boarding from the P&R.

The other issue is the lack of community facility, which was promised previously. If elected, I’ll fight for that.

I adore the Cardiff Bay barrage. There’s nothing better than a walk along there during early evening, particularly as the sun is setting. I think I like it so much as it’s peaceful and unique to our city!

I think trust is a big issue. Many politicians aren’t transparent enough and are deemed to be ‘out of touch’. Engaging with the electorate is difficult to get right, but consistency and transparency are two significant steps towards this.

I will work tirelessly to represent the ward and ensure that voices are listened to. I am conscious that I’ll be YOUR representative, so therefore it’s right that I listen and consult reguarly on issues as they arise.

I will work with businesses and residents to improve the parking issues. As I mentioned earlier, there isn’t a quick one fix or magic wand! But, that doesn’t mean it’s not possible to alleviate some of the problems being endured day in, day out, right now.

I’ll also fight for the community facility that was promised.

Good question! Cardiff is often dubbed the fastest growing European capital city, yet we’re behind in some aspects of that, particularly transport. For example, if you travel to close capitals such as Dublin or London, you can hire a bicycle for an hour or two, yet you can’t here. We need to change that.

Our road network is very fragile, I’d be keen on exploring how we might make that work better for the wider benefit of the whole city.

Anything that boosts our cities reputation to tourists would be something of huge interest to me, from improvements to signage to street cleanliness, I’m sure there’s lots that could be on that agenda.

I’d keep the Dr Who exhibition open at the bay. I’m not going to confess to being a fan, but what I do know is that it attracts so many fans and tourists. It seems a great shame to be closing down later this year.

One thing I’d love to see is better rail links to the East of Cardiff, because it’s strange to have a whole chunk of Cardiff without easy access to the UK National Rail network. It’s also frustrating for us all to have to go 4 or 5 miles in to the city centre to then technically go back on ourselves once we’re on the train (provided we’re going east, of course!).

Finally, I’d be interested in looking at some sort of “open city” event, where members of the public get the opportunity to view buildings that are not normally open to the public. This is a big thing elsewhere in the UK but doesn’t seem to have made it here yet and we have so much here to see!

To me, being a councillor is 3 things.

If I am lucky enough to be elected, I’ll follow these 3 principles throughout my time as councillor.